The Instagram Shadowban …has it got you going BAN-anas?

But sometimes I just can’t help myself and refuse to edit.

I’ve mentioned this before, but I really don’t support some of the “fear mongering” that goes on in the online education space. Like there’s a sniff of opportunity in the air and suddenly everyone’s writing you emails saying you NEED to buy their course or how the hell else will you escape the Instagram shadowban of death!?!

First of all, they all need to chill and stop preying on people’s fears for sales. Instagram is gonna do its thing (because it’s a company + wants to make money too) and it’s our job to understand it so we can use this glorious free marketing platform to our best advantage.

It’s the act of blocking a user from an online platform in some way where they don’t realize that they’ve been banned. So instead of coming out and saying “hey, you’ve been violating our terms of service / we think you might be spam so we’re temporarily blocking your account”, they instead decide on ways to limit your reach.

In the case of Instagram, they decided that if your account was deemed “potentially spammy”, they’d make your posts essentially invisible to anyone who’s not following you. Which makes it pretty dang hard to reach new people on autopilot through hashtags because your post literally will not show up in those feeds.

Even without hashtags, you may have been shadow-banned if you engaged in “spam-like” behaviors; like mass follow//unfollowers, regularly hitting daily/hourly limits for liking/commenting/following accounts, or your account has been reported often by others.

Is the Instagram shadowban a real thing? Yes, and kinda.

Instagram’s been doing A-L-O-T of clean up. Which I think is awesome because you only need to click on an innocent hashtag and get greeted by a naked something once to know you don’t ever wanna see that again.

As part of that clean up, they’ve been attempting to find and limit the accounts that don’t follow their rules, hence this whole “Instagram shadowban” conversation.

Case #1: They shut down those spammy bot companies

When those companies were closed down (including MassPlanner and Instagress), accounts using them were most likely marked as having “spam” activity. To that, I say hallelujah!, I don’t need any more inauthentic comments saying “dope pic 👍🏼” on the boring graphic I created.

If you ever used, or still are using, one of those accounts I’d recommend you stop as Instagram continues to get smarter and you’re on rented Instagram-land. Meaning they can shut you down tomorrow and unfortunately we’d have no way to “re-connect” with all our followers. (That’s the only legit fear I’ll put in you. Don’t mess with not following terms of service – how would you feel if people tried to violate yours?)

Whenever a platform goes through a huge overhaul, there’s bound to be some accounts that get unfairly flagged because it’s an automated look at your activity. If you truly feel you haven’t abused any of Instagram terms and haven’t used offensive hashtags, then contact them directly and let them know your issue.

Case #3: They shutdown certain hashtags in order to clean up their feeds.

Like I mentioned above, no one wants to click over to a hashtag about creative art and be greeted by nakies, junk accounts (I swearrr not a pun), or spammy advertising. That’s a terrible user experience and Instagram cares about that because they want you to like and stay on their platform!

So yes, Instagram banned a ton of hashtags. And yes, if you used one of those hashtags then your post would be “shadow banned’.

To figure out if you’ve been shadow banned or not, find a few accounts that don’t follow you and ask them to check your most recent image to see if your post shows in the hashtag feed. Note – this would be easiest to do just after you post so you’re still up in the top of the “most recent posts” section and if you have a few smaller sized hashtags where posts aren’t being added too quickly.

If they do NOT see your image, then it means a) one of your hashtags was part of the banned hashtags and/or b) your account has been banned as a whole because it was flagged as “spam-like” behavior.

Feel free to join The Shop Squad Facebook group and ask some members there that don’t follow you to help you out.

What to Do if you’ve Been Shadowbanned?

1 | Let’s start with the easiest. Check + clean up yo’ hashtags.

The thing is you might be sitting there thinking but I don’t use spammy hashtags or even ones that could be considerable questionable for that kind of content to show up.

But the people posting that type of questionable-content aren’t exactly playing by the rules. They were out there looking for POPULAR hashtags they could exploit and get found through.

At one point #TGIF and #dogsofinstagram were on that list. Like whhhy? Because they’re massively popular so spam accounts target them (which funny enough we all know the really big hashtags aren’t even the best ones to use!).

How to check if a hashtag is “OK” to use?

Go to search > type in the hashtag > underneath the TOP POST section is MOST RECENT > if the hashtag is banned there will be no recent photos and instead show a message that “Recent posts from #hashtagexample are currently hidden because the community has reported some content that may not meet Instagram’s guidelines. Learn more.”

If that’s the case, remove it from any of your recent posts and from your list of hashtags to use. You can always re-visit it in the future, once they clean up accounts most hashtags return to okay status. (which is why again you shouldn’t give into any trying to sell you a ‘banned list’ or “non-banned list” of hashtags to use. They can’t guarantee any hashtag will always be in “good” status.

Instead, just regularly monitor the hashtags you use — just click through them on a recent post to be sure everything’s in good standing.

Instagram does not allow any third-party app to make actions on your behalf. So any app that is liking photos, leaving comments, following accounts, etc — get off them.

Are schedulers okay? YES. As long as they don’t actually post for you. Apps like Later, Planoly, Preview are all okay because they simply send you a push notification at the time you schedule and it still requires you to go into the app and manually push “post”.

Take a break for a couple of days to give your account a chance to kinda reset. Then when you start interacting again, don’t go crazy.

A normal user isn’t going to log onto Instagram and spend the next hour mass-liking photos or following 100 accounts.

Especially if you’re a smaller account they give you less “engagements” than a larger account because they assume you’re interacting with less people. Less followers = less to engage with, makes sense.

So while I don’t have exact numbers to give you, I’d say play it smart. Start back slow and scroll through your feed a few minutes a day to like + leave comments.

Don’t go on mass follow or unfollow sprees – and don’t even get me started on why I hate that as a “growth tactic”.

4 | Don’t do offensive or weird things that would get your account reported.

This one really varies and assuming you’re not posting super offensive nudes or crazy advertising spam, I’d say this:

Refrain from mass tagging a ton of random accounts in your photo – I don’t know who suggested this as a growth strategy, but unless you’re giving a nice shoutout, a product of theirs is featured in the photo, or they actually asked for it (like, show me your favorite ____ ! Tag me in your next post), I wouldn’t tag a random account in your posts.

Cut down on the overly promotional text-heavy graphics. You can communicate a similar message through your captions, as the second or third image if you upload multiple for the carousel effect, or as a call to action in your stories.

Let them know “My posts are not being shown in the hashtags I’ve used”. Don’t say you’ve been ‘shadowbanned’.

3. Send an email at support@instagram.com.

For the love of all things good, please don’t rant or complain about your Instagram reach on Instagram TO YOUR CUSTOMMMMERS.

They’re probably normal people, going about their normal Instagram lives, and then all of a sudden they start reading about “shadowbans” and decreased engagement? Trust me when I say, the normal user has zero idea what goes behind the scenes and they’re perfectly okay with that.

They don’t need to hear about the growth hacks you’re trying this month. That just doesn’t sit right with the average consumer.

Keep your rants (I know we all have them, myself included!!) to people + groups that get it. Keep it profesh AF to your customers 😉

On top of those tips, let’s discuss a few ways to avoid being banned in the future.

1 | Rotate your hashtags around. Don’t always use the exact same set like a robot would — I’m 100% guilty of this and needed to go back to the drawing board this past weekend.

If you want to see my exact research I use with clients, you can grab your copy of the Hashtag Discovery Workbook here.

2 | Regularly check your hashtags to ensure they’re all in good standing. And be sure the hashtags you’re using fit with the content you’re posting about. While hashtags aren’t meant to describe exactly what’s happening in a post, your post should be relevant to the meaning + intent behind the hashtag.

If you focus on leaving genuine comments, it’ll slow you down a bit (which means you won’t be crazy spamming accounts), plus you’ll be creating actual conversation — which really matters to create a more lasting impression.

PHHHHHHHEW. Okay, how are we all feeling? Less panicky I hope?

Let me know what questions you have.

**I wanted to note I’ve also heard a lot of rumblings about Instagram watching “Instagram pods” which are groups of users that work together to “boost” each other’s engagement by actively liking / commenting on each others posts.

I am not a fan of Instagram pods for a lot of reasons, but I do understand some users feel they’re valuable. Just something to look out for. Instagram is aware of all the hacks and workarounds users try to create.

Which is why my focus has always been on the one person that does matter — your customer — and learning how best to connect with her so she WANTS to engage with you all on her own. You can learn more about my strategy to connect + convert your audience to customers here.

Grab this cheatsheet + walk away knowing that your account is set up strategically, get the visual grid basics down, make the most of captions + hashtags, how to post strategically; THEN focus on growth.

Yasss! Let's start laying your Instagram foundation so you can connect with + converts your audience! Check your email to grab your cheat sheet!

Get All the Secrets 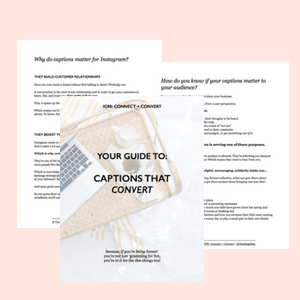 Yahh of course you do!